This information is taken directly from the Let’s Talk About It Oklahoma website.

America is the land of the second chance; one can always start over, somewhere else.  That’s our belief, even after the disappearance of the frontier.  As one of the last states to join the Union, Oklahoma has many stories of new beginnings.  It was the territory forced on some, a newly opened land others rushed to secure, and, later, a scorched or unproductive home that many were forced to leave.  After the outflow of the Great Depression, even those who stayed had to start over, to re-establish themselves.  Both groups – and their children – hopefully remember enough to acknowledge, unashamed, that their struggles here significantly shaped their lives.

The four novels and memoir in this series re-envision the past from the perspectives of the late 20th century.  Two deal with the experiences of Native Americans before statehood, although part of Howe’s novel is set in the late 20th century.  Askew and Dunbar-Ortiz center their narratives in the 1920s and 1940s.  In her second novel, Letts returns to a Sequoyah affected by the malaise after Vietnam.  Clearly, the past is not a closed book for these authors.  All the narratives show people shaping their own lives within the historical moment, even when they are caught up in events that are beyond them.

One is struck by the diversity of these narratives, dramatizing regional and cultural differences within the state.  Historians relate that topographic differences between eastern Piedmont/prairie and western plains created very different agricultural economies in the state.  Likewise, both the dates and the ethnic composition of migrant waves enriched Oklahoma with very different cultures.  Glancy and Howe focus on two important tribes, the Cherokee and Choctaw, which have strong matrilineal elements.  Askew dramatizes the connections, compromises, and collisions among whites, Native Americans, and African-Americans in a 15-year period after statehood, leading up to the Tulsa race riot,  Through an account of her own life, Dunbar-Ortiz explores the social psychology of the poor whites who became the “Okies” of the Thirties and Forties.

One question that arises is whether so many groups, taken together, created a common “Oklahoma experience.”  Early census figures support the case for regionalizing the state into Midwestern and Southern cultures, with a central portion of intermingled “Oklahoman” culture.  Among the books in this series, it makes a difference whether the narrative centers on the Cherokees’ traveling to Oklahoma (Glancy), the Choctaw community of Old Durant (Howe), or homes in black and white communities of Tulsa (Askew).  Billie Letts’ fictional Sequoyah certainly provides more community support than Roxanne Dunbar-Ortiz’ Piedmont, where a dysfunctional family is essentially on its own.

But we find an essential commonality:  featured are people who confront challenges that define who they are and what they will become.  While all of the stories are set in Oklahoma, the racial prejudice, the poverty, the town or urban environments, the violence, and even the extremes of weather could have occurred elsewhere.  Perhaps these novels mark a maturation of Oklahoma literature, a merging of the state’s distinctive experiences with mainstream narrative themes.  No longer does the state itself seem so much under the microscope, as a place set apart by Indian settlement, land rushes, and the Dust Bowl, although the legacy of these elements is clearly present.

Pushing the Bear disperses its story of the Trail of Tears through many voices, enacting the multiple perspectives of those who live through a major historical trauma.  A young wife in Rilla Askew’s Fire in Beulah, left alone by her husband, is drawn into dangerous relationships with her brother and her maid, in the context of racial tensions that explode in Tulsa.  In her memoir of “Growing Up Okie,” the author of Red Dirt is both Roxie Dunbar and Roxanne Dunbar-Ortiz.  The child directly feels her poverty and social constrictions of a small town; the adult author, now living in California, struggles to come to terms with her origins, even as she analyzes them.  Shell Shaker daringly parallels events from the 18th century with the present day, centering on the women of one family within the Choctaw community.  In fulfilling their roles as peacemakers, they suggest what older traditions can offer in the process of healing.  The Honk and Holler Opening Soon takes its name from a small cafe where the town’s character is shaped.

The Oklahoma Experience:  Re-Visions was developed by Dr. William Hagen, retired professor of English at Oklahoma Baptist University, and Dr. Jennifer Kidney.  Development of this theme was made possible by funding from the National Endowment for the Humanities. 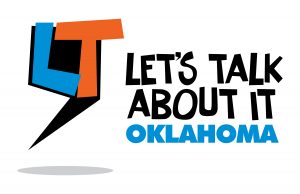