September is Suicide Prevention Awareness Month.  Did you know that suicide is a leading cause of death in the United States and that Oklahoma is ranked 8th in the nation by the number of deaths by suicide (higher than the national average).  Suicide has no single cause and there are many risk factors.

Suicide is when people directs violence at themselves  with the intent to end their lives and die as a result of their actions.  Some attempts do not end in death but that doesn’t mean that there is not injury.  Suicide is the second leading cause of death among people aged 15-24 years.

There are many warning signs of suicide. 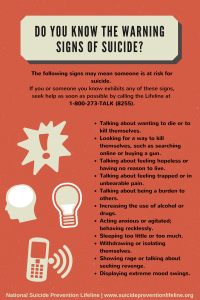 What can you do if you know someone who is considering suicide, you can be the one to (#BeThe1To) :

The library has compiled a list of resources available if you or someone you know needs more information.