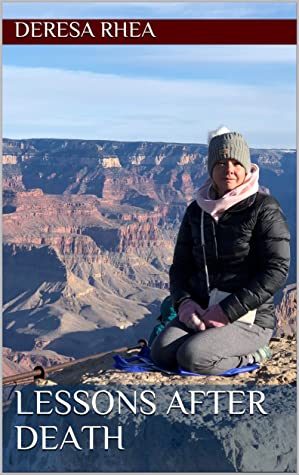 Lessons After Death by Deresa Rhea

As we scheduled the book signing for Dee, we asked her for some biographical information; little tidbits we could share with the community that would draw interest to her and her book. What she returned is so heartfelt and touching, we had to share it here. Thank you, Dee, for being so honest and touching all of our lives.

“Edward Gene Rhea was born the second of twins in Blackwell, Oklahoma in February 1974 to Mickey and Joan Rhea of Deer Creek. He was raised in Deer Creek all his life and graduated from Deer Creek Lamont High School. Deresa Ann Duckworth was child number two, born in Fairview, Oklahoma in January of 1979 to James and Marenia Duckworth. The Duckworths moved around often until Deresa reached second grade when they settled down in Blackwell. She attended school there until her junior year.

“Deresa and Edward met when she was in high school. They both remember their first meet, neither one remembers the other, both of them having two very different memories. It was something they laughed about many times. They began to date In April of 1997. By December they were married. It was not a whirlwind romance, nor was it a girl meets her prince. They were just two people who had a passion for music and fell in love with each other and that passion. They started a family not long after getting married, their first daughter born in 1998. The other two were born in 2000 and 2001. Their son would be a surprise years down the road in 2010.

“They lived a life dedicated to music, collecting instruments, learning how to work on and build guitars. His main passion before passing was building and repairing steel guitars. Ed was well known as a musician and was a member of many different bands all throughout their marriage. Dee was known as his wife; he loved to tell people about her and his kids. He was proud of his family who supported him chasing his dreams.

“Ed was a giant in the field of loving people and music. In music, he was well known for his ability to play multiple instruments. With people it didn’t matter what it was, if he could help he would. It was his passion to show others love and kindness. As a child his mother said that he didn’t know a stranger, which carried into his adulthood. If he had it and you needed it, he would fine a way to get it to you. Laughing was a daily thing for Ed. Jokes and wise cracks were always right on the tip of his tongue and if you happen to meet and get to know his children, they carry that tradition on with pride. They love the way he does with their whole hearts. He raised them well. Though if you asked him, he would tell you that it was Dee that raised the kids. He was sure that all knew she was the one who really raised his kids and he was proud of her.

“Dee also chased some of her dreams once her children grew up, going to college and graduating in 2011. She then began working in healthcare then moving into the oil and gas industry. She never gave up on her dream and passion of writing. She was known for having a book, or a notebook with her. If she wasn’t reading she was writing. She was not the people person that Ed was; most of the time she was a recluse and stayed away from large crowds. She had few friends and enjoyed staying in the shadows letting the spotlight shine on Ed.

“Ed passed away in May of 2019 and it was 2021 when Dee finally reached her own dreams, when she published her very first book. If you asked her when she was young if her first book would be considered a self-help book she would have laughed, as those were the one type of book that she didn’t read. Yet as time went on after Ed’s death, her journal started to read as if she were writing a book and she realized that the things she was learning about death were things that people just needed to know because so many times people would tell her, “I just don’t know what to say!” She realized that at all the things we work at to be good humans, death was something that we just failed at. Yes, that includes her as well. It is time to stop letting “I didn’t know what to say!” be the excuse we use to get out of dealing with grief and death. Coming to the conclusion that it is perfectly fine to say nothing, and realizing that the word “widow” just described a woman. It doesn’t define them. Thus, talking about everyday normal stuff was just as good as talking about “how they are doing.” It is a book to remind those walking with a widow that love is the main thing that helps us get through death.”