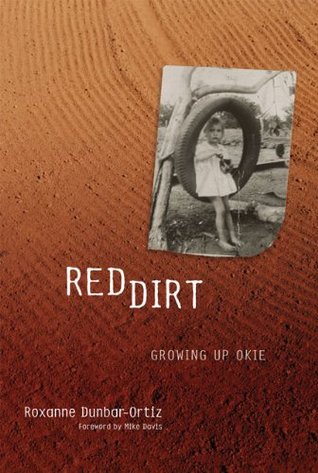 One of the more interesting chapters in Red Dirt reflects on the kind of people who pushed their way to the frontier, those who stubbornly fought the elements and other humans to make a place for themselves.  These Scots-Irish, the author’s ancestors, were also among those who hung on, clinging to their marginal farms and town occupations rather than migrating West during the Depression.  Not that their situation was much better than those who hit the road.  Roxanne Dunbar-Ortiz identifies herself as an “Okie” in both senses, growing up among those who stayed and later joining those who settled in California.

If Fire in Beulah dramatizes the human toll of living in the midst of oil and racial fevers in the 1920s, Red Dirt records and analyzes the effects of growing up dirt poor in Piedmont, Oklahoma, during World War II and afterward.  A powerful mother, frustrated in her ambitions, drives too fast and turns to alcohol; the child’s asthma condition requires extraordinary care and causes reactive abuse from her mother; a very limited small town is near enough to Oklahoma City for the teen to become painfully aware of her lower economic and social status during the flush years of the 1950s–all these factors lead the young Roxie Dunbar to wonder whether she will ever have a “normal life”.  However, Roxanne Dunbar-Ortiz, as author, remembers the support she got from her brothers, the sister’s home that was a refuge, the Scout activities led by her mother, the girl and boy friends, all of which helped her develop into a sensitive social historian, committed to rendering her people accurately and sympathetically.

The author returns to a childhood and a place she had tried to forget.  Her long-delayed visit to family gravesites and to those relatives and friends left in Oklahoma, her investigation into the radical grandfather she had once been too fearful to acknowledge, and her production of this autobiography all show that journeys can sometimes culminate where they began.