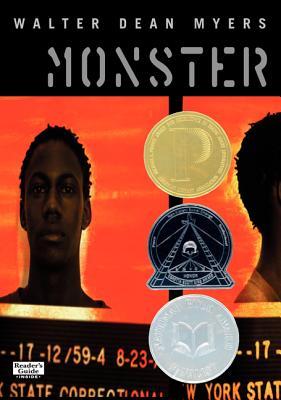 Myers, like Cormier, has been acknowledged for the body of his many award-winning novels.  Sixteen year old Steve finds himself in jail on trial for a murder he is not sure he had anything to do with, or anything significantly to do with.  In spite of his middle class status, he is a black teenager in Manhattan who may have simply been in the wrong place at the wrong time.  However, he is unsure and feels like he has walked into the middle of a film uncertain if he belongs.  To probe his recent past, he decides while waiting in jail for his trial to make his own movie in his head, to write a screenplay to come to terms with his own experience.  He wants to discover if he is what the prosecutor calls him:  a “Monster.”  His white attorney insists his portrayal of himself as innocent must never falter even while his journal entries and flashbacks cause him to questions himself.  We also learn he is a member of a film club, and he contends that on the day of the murder, he was checking locations for a new movie he was going to film.  Myers finds adult challenges to young adult fiction disturbing because his own interviews of juveniles in jail show him that they “have to make decisions under the pressures of the moment instead of having the benefit of previous discussions in the classroom or around the dinner table.”  And he goes on to add that “literature can, to an extent, replace these discussions” in families that have made difficult topics taboo.